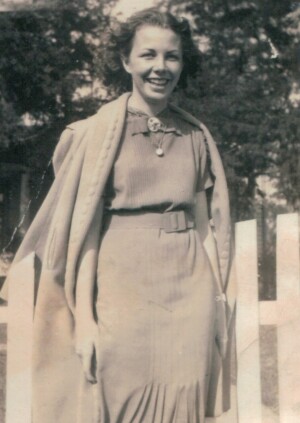 Wanda was born on her brother Ralph’s second birthday in the Price Hill area of Cincinnati. Regarding her name, she related, “My dad gave me my name, just because he liked it. I always hated it and planned every time we moved that I would tell everyone my name was Jean but I always chickened out. Mother used to scold me, she said I shouldn’t hate my name since my dad had chosen it. She was right of course.”
Wanda experienced the roaring 20’s and the great depression in Ohio where her father had a position with the B & O railroad. By 1935 her father was wanting to try his hand at farming and in March 1935, they moved to the North Salem area. With one month of school remaining, Wanda rode the bus to school and quickly befriended Maxine Gordon and caught the eye of Maxine’s handsome brother, Jim who was a senior. Wanda related that dating was a bit difficult as they had no telephone and boys would have to drive out to the farm to ask her out. This worked for Jim who only lived a few miles down the road. Five days after her graduation from North Salem High School, Wanda and Jim were married, with Maxine serving as maid of honor.  They were happily married until Jim’s death over 52 years later. Wasting no time, Wanda and Jim had two children in the next three years. She loved being a mother and farmer’s wife. Ten years and two more children later they moved to Brownsburg. This was 1952 and their little farm was at what is now the intersection of Grant and Tilden. At that time that marked the south edge of Brownsburg as Grant Street dead ended into the farm and Tilden ran only a few blocks east of Green Street. The farm had a nice barn and new large tool shed, but the house was small with two bedrooms and one bathroom for a family of six. Wanda embraced her role as a farmer’s wife and mother of four. She was involved in school projects with the kids, 4-H projects, was a cub scout leader, several local women’s clubs and attended Brownsburg Christian Church.  She liked to joke that once after a Sunday service, Reverend Yerick told her she was the prettiest lady in Brownsburg. Wanda and Jim enjoyed attending the Indianapolis 500 during the early 50’s with the Coopmans from Linden, assuming all the crops had been planted.
She enjoyed playing cards with friends and they also went to high school ballgames, watching their kids play or cheer. Wanda dearly loved her Bunton grandparents and visited them often in rural Jackson County Indiana. They were apparently good role models for her as she assumed the role of grandmother with relish. She would literally do anything for her grandsons and over the years literally did everything. Wanda loved sports and was pretty competitive in nature. She grew up watching her brother play sports in school and later her kids and grandkids. She was usually there. She also talked of playing baseball with the boys as a kid herself. As an adult she enjoyed many bowling leagues and loved to play golf. She took up golf at about age 60 and was always ready to play. Any mention of golf around her would usually elicit “did I ever tell you about the eagle I made on the 9th hole at Pittsboro”.  She also enjoyed fishing and took several fishing trips with Jim. Wanda’s 80th birthday was memorable. The vintage drug store in North Salem is closed on Sundays and they allowed us to use the store for her birthday celebration. It was a fun day, a lot of visitors and big sign announcing the birthday. This is the same drug store where Wanda danced as a teenager.

Wanda was a loving and supportive mother to Denny, Diane, Gary and Peggy. She also treated son in law Pat Clossey and daughter in law Janet Gordon as if they were her children. Wanda was a devoted grandmother to her grandchildren, Steve, Michael (wife Jodi), J.D. (wife Chris), Josh
(wife Brooke) and Eli. She also loved her great grandchildren Mackayla, Mallerie, Tyler, Audrey, Lucas, Georgia, Nolan, Regan and Luke. Wanda was a special aunt to numerous Bunton and Miller nieces and nephews. She always honored their birthdays with a card. She especially enjoyed the Saturday morning breakfasts with the Miller families. Along with the strawberry waffles, she liked the friendly banter with classmate and brother-in-law Shorty over the relative merits of the Cincinnati Reds versus the St. Louis Cardinals, his favored team. Wanda was a Reds fan and attended several games in person and watched many games on TV. Wanda was a friend to many folks in North Salem, Linden and Brownsburg, topping the list would be Doris and Leonard Lovell of Brownsburg.

Wanda liked serving others. She enjoyed volunteering at the Ronald McDonald House and Meals on Wheels for many years. In lieu of flowers, donations may be made to these two organizations

Friends and family will gather at Connection Pointe Church on Monday, April 19, 2021 from 2 pm until the time of the service at 4 pm.  Wanda will be laid to rest in Roachdale Cemetery following the service.

Arrangements have been entrusted to Eric M.D. Bell Funeral Home in Pittsboro, Indiana.  All are encouraged to share thoughts, prayers, and memories with Wanda's family on her memorial page found on the funeral home's website, www.ericmdbellfuneralhome.com .

To send flowers to the family or plant a tree in memory of Wanda Jean Gordon, please visit our floral store.

Your browser does not support this video format. You should be able to view it in Chrome, Safari or Internet Explorer.