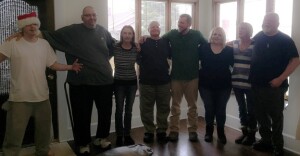 Douglas Hughes of Maplewood, Indiana passed away on December 1, 2021.  Below is a tribute written by his brother.

December 1, 2021, Douglas 'Reckem' Hughes stuffed himself into his custom, 1993 Plymouth Voyager--it had a special red pinstripe acquired at the local Lizton Dairy bar on one side, and one of yellow from the Brownsburg Walmart, and headed to Kroger.  With a fresh paycheck and hankering for pie, Ring Dings, Twinkies and other delights, he set course for a date with his food addiction and its satiation.  The week before he and Kenny had joked about the poor fools tasked to be pallbearers should either die. Doug giggled, and both vowed to play this prank upon friends and family.  For those of you who said yes, we want to thank you for the looks of horror when you realized that carrying a 450(give or take 30 lbs.) man in a casket would probably be your last act on earth.  For those of you who were not let in on this prank, sigh your relief now.

Kenny and I think the first vehicle Doug crashed was at the age of 12—he totaled it.  Then he ‘borrowed’ my ’62 Impala and side swiped Kenny’s garage, and a telephone pole.  Over the years we lost count of how many wrecks he experienced. His friends from Tri West said a 5-mile ride to school with Doug was more thrilling than a roller coaster. One of them prayed so ardently he became a pastor.  And those who suffered constipation, often asked for a ride, hoping for a miraculous cure.  That said, the last 3 vans he had were victims of his incredible driving: 2 totaled, 1 on life support.  And yes, he is giggling about this right now, along with his last prank.  One day after he died, Kenny and I got a ‘help I’ve fallen’ phone call from Doug.  Pretty good joke since Kenny disconnected all that equipment the day before.

On the Saturday after Thanksgiving, Doug was giggling, plotting and scheming pranks when Alesha and I visited him.  So, if you did know Doug, you know he’s laughing right now. He was dead before he ploughed into Kroger; and even in death, he totaled that voyager. He left the world the way he lived in it. Lead foot on the petal, and eyes closed to the road.

He is survived by his brothers, Mike and Kenny; and his nephews and niece, Jon, Jordan, and Ally; and a great nephew, Mehki.

We will have a special ‘Remember Doug’ day on May 15th.   Time and place will be announced closer to that date.  We’ll share stories of his antics.

Arrangements are entrusted to Eric M.D. Bell Funeral Home and Cremation Services of Pittsboro, Indiana.  All are encouraged to share thoughts, prayers, and memories with Doug's family on his memorial page found on the funeral home's website, www.ericmdbellfuneralhome.com .

To send flowers to the family or plant a tree in memory of Douglas Hughes, please visit our floral store.

A Memorial Tree was planted for Douglas

Join in honoring their life - plant a memorial tree